Everything is the Buddha

Pace (pronounced pah’ chay, “peace” in Italian), our beloved “gentlest of all gentlemen” German Shepherd, died on February 26 surrounded by the monks on the west porch of the Monastery. Throughout his life, including the last moments, Pace offered me simple lessons in Presence. 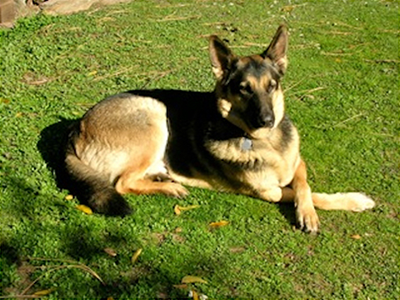 The west porch was where Pace often watched over the Monastery. Frequently, I would pass him coming from the office to the kitchen or heading from one property project to the next. There he was, often lying with his head up, one paw placed over the other, regal-like in his handsomeness, his nostrils twitching in the air, his eyes moving from hopping bird to scurrying cat, while never losing awareness of our black lab Sadie’s whereabouts.  It was then I’d realize something about my own process.  Maybe a brisk, tense stride, signaling a feeling of urgency or agitation. And huh, wow, there is an intense conversation in the head about nothing happening now! I’d feel my feet slow down and meet the earth and take a deep breath, seeing if I could twitch my nostrils too, hoping to join Pace where he seemed to be. What a mirror! 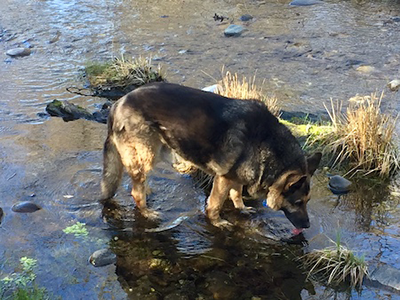 Pace in the creek at the Monastery

This reflection of presence was everywhere Pace lived.  Walks were filled with exploring and investigating, his paws sometimes stopping on a dime when his nose picked up a scent, his head careening behind him and to the right, his sensory detection system zeroing in with laser accuracy. It was clear he was taking in things that I could not perceive.  Sometimes I’d get down on the ground with him and look at whatever he as looking at. “Look more closely,” I’d hear, “be Here.” On retreats, he would approach every single person, greeting them with enthusiasm.  In late night hermitage talks, he’d glance at me patiently while I voiced my struggles, always leaving me with a sense of nothing wrong, it would all be okay. 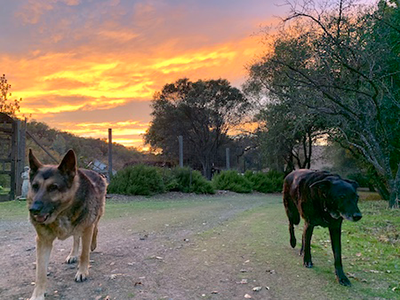 His was a life of quiet giving. When he died, he arranged it so we could be with him as he transitioned. My hand, resting on his side, moved up and down with each breath.  Then, my hand, buried in his fur, lay still.  I have never been given that experience before, and seeing the thinness between being alive and being dead was sobering.  It is clear, I do not want to waste this life in a conversation in the head.  I want to practice quiet presence, curious exploring, attentive looking, enthusiastic greeting, patient understanding, and selfless giving, all the while, having my nose twitching in the air, just like Pace taught me. Thank you, Pace.