You may recall mention of a wabi sabi sink? It was indeed epic to get it installed on a very thick concrete wall, but a couple of heroic plumbers managed. (The truly impressive part, for me at least, was how cheerful they were through the process.)

I’m not sure what, precisely, is the relationship between wabi sabi and funky, but I’m pretty sure we have both in clear evidence at our new practice home. Here is the trajectory of sink installation from cabinet to completion.

The full story of the sink 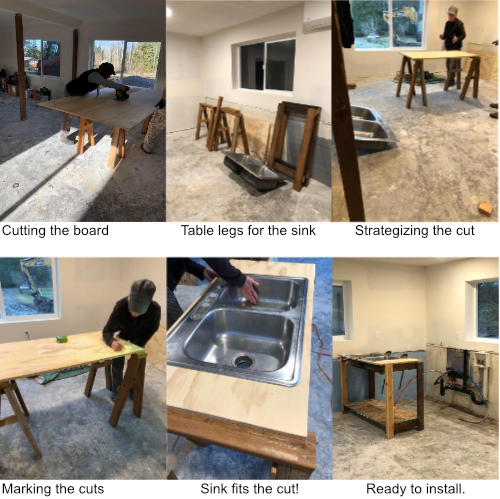 After the sink we tackled the walls. The concrete walls were not a precision operation from the get go. They sort of wander along from corner of the building to corner of the building, sometimes one width, sometimes another. The stud walls on top of those concrete walls are “roughly” the same width (some 2X4, some 2X6, some shimmed out, some not), so the whole thing has something of a serpentine feel to it. It’s not particularly noticeable unless one is attempting to do something with it, such as creating flooring that meets the wall in any kind of consistent way. The slab floor has its own eccentricities which caused us to let go the notion of any sort of flooring, such as bamboo or even tile. What to do? Hello, green sheen paint!

Green sheen only comes in a few colors so we’ve learned to love what’s available, always a good direction. Their brown is sort of a very milky chocolate which was difficult to adjust to after “Monastery brown,” so we decided milky chocolate would go nicely on the floor. Truth be told we’re not all that sure what the floor will be eventually, but for now it’s fantastically adequate.

What to do with the concrete walls? We really wanted them to “disappear,” but weren’t being successful with making that happen. We even toyed with the idea of doing some sort of sponging designs with multiple colors. Finally, we decided to try the one color that had seemed from the beginning as a no go—slate. Nearly black, it does the trick. 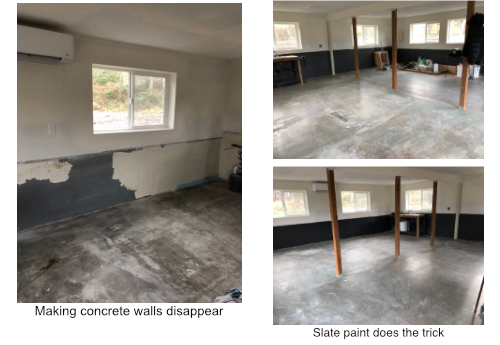 When you get here please do keep in mind our wabi sabi/funky design aesthetic.

We’ve been waiting for schedules and weather to cooperate and allow us to do a final (really?) adjustment to the small buildings on the property. The largest, the wood shop, is moving to the lower end of the property, on the park side and a new, tiny building is coming up top ready to become our bathing house.

As everything is moving towards our summer get-together we’re getting a clearer sense of when people are planning to be here. So if you want to party to the max, and you have not firmed up your dates, these would be good times to choose. June 15- 23 and July 20-Aug 5. If you have already made plans and these are not your dates, be assured we will still party—in a privileged environment practice sort of way.