Upon entering the Monastery, one of the first signs one sees, right after “Speed Limit 5 mph,” is “Your Silence is Requested.”  Often, the first thing people notice when arriving here is the gorgeous silence – no cars, no sirens, no city sounds.  Silence is perhaps the first and foremost element of the Privileged Environment, and one I’ve been exploring in my own practice.

Recently, these quotes have particularly piqued my curiosity and fueled my exploration in this area:

Meditation is to be aware of every thought and of every feeling, never to say it is right or wrong, but just to watch it and move with it. In that watching, you begin to understand the whole movement of thought and feeling. And out of this awareness comes silence.
- Jiddu Krishnamurti

I used to sit for hours together, with nothing but “I am” in my mind and soon peace and joy and a deep all-embracing love became my normal state.  In it all disappeared. (…) Only peace remained and unfathomable silence.
- Sri Nisargadatta Maharaj

So, what is silence, anyway? Is it simply a lack of noise? Is it a quality of stillness? A vast void of nothingness? And what does an exploration of silence have to do with everything being the Buddha? Certainly the silence of the Monastery is not simply a lack of sounds, for one can hear the melody of birdsong, the scampering of squirrels, the moos of distant cows, and the rustling of pine trees in the breeze. No, it seems that the silence that is “requested,” and to which the Privileged Environment is always inviting us, is not merely an absence of noise to the ear but attention on a place of the Heart.

In my experience, there are three elements that support movement to that place of Silence.

When I first came to the Monastery, I became aware of the voices that were dictating my life in a new and powerful way. Standing at the dishwashing station, I could watch with a degree of clarity that I’d never had before how the voices criticize my every move (“You added too much soap!  You’re wasting water.  You’re going too slow.”).  I’m convinced that ego voices are largely camouflaged by the ordinary noises of society, so having a backdrop of quietness reveals them.  Once we see them for what they are, their cover is blown and while it is possible to recognize them even amid the prevalent noises of daily life, periodic spells of silence are crucial.

For years and years in Sangha, we talked in group discussions about what ego was doing and saying.  There was much laughter in revealing ego from what I project was the sheer relief in recognizing that we were not alone and ego’s antics and scams were common to everyone.  I project that what was happening in those times is that ego was being revealed, and we were getting to see deeply what we are NOT.  Of course, it is always appropriate to “out” conditioning, and thank goodness we have the powerful tool of Recording and Listening to reveal ego anywhere, anytime, throughout our day.

3.  Lose interest in the voices of ego.

We are deeply conditioned to do, fix, and solve, and yet the “fee for the ticket” to Unfathomable Silence seems to be utter acceptance and surrender. In the Yearlong Retreat, we have been constantly practicing this with the encouragement to just notice, just notice, just notice. Being, not doing.  Losing interest in the noise of ego is a letting go and choosing compassion now…now…now.

So, what does this have to do with “Everything is the Buddha?”

Practicing silence is a practice not of parsing, but letting go; not of fixing, but accepting; not managing, but surrendering.

We are training attention to be with Thisherenow, which may be another way of simply acknowledging that Everything is the Buddha. 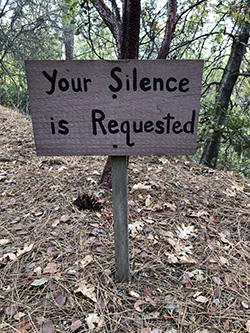 Monastery Wall
ARCHIVES
From the Guide